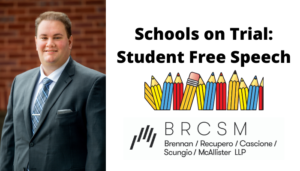 by Sean Clough | On April 28th, SCOTUS heard oral argument in what has the potential to be a seminal case on public school students’ free speech rights.

In the matter of Mahanoy Area School District v. B.L., a sophomore in Pennsylvania who was a junior varsity cheerleader learned that an incoming freshman had made the varsity team and she had not.  In her frustration, B.L., along with her friend, on a Saturday morning while off school grounds took a photograph of themselves with their extended middle fingers via B.L’s phone. B.L. adorned her newly minted photo with the text “F&#! school F&#! softball F&#! cheer F&#! everything” (she didn’t edit in the original) and then proceeded to “snap” the photograph, broadcasting it to her 250 friends, including classmates and cheerleading teammates on the social media site Snapchat.

The following week, her snap disseminated throughout the school, making some students visibly upset and disrupting classroom time. The photograph found its way to the cheerleading coach and B.L was off the JV team for her sophomore year and invited to try out again the following summer. B.L. appealed the discipline and the school board stood by the administration.  Thus, a federal lawsuit was born.

Prior to B.L.’s case, schools have operated under a 50-year-old legal precedent which allows public schools to prohibit or discipline students whose speech materially disrupts the classroom environment.

Now, given the advent of social media, the legal question becomes: can public schools prohibit or discipline students whose speech occurs off school grounds and nonetheless materially disrupts the classroom environment?

Ultimately, the Third Circuit Court of Appeals ruled in B.L.’s favor, finding that schools have no right to prohibit or discipline student speech that occurs off school grounds while not under the supervision of the school. The U.S. Supreme Court is now reviewing that decision and public schools across this country wait in anticipation.

Both sides warn of the ramifications of potential outcomes. The lawyer arguing for the school department believes that public schools will “freak out” if the Supreme Court upholds the Third Circuit and mandates that schools cannot punish off-campus speech that creates a substantial disruption on campus.

Schools grappling with online bullying or harassment have much to freak out about if the Supreme Court sides with B.L., the school suggests.  If schools can only discipline speech that occurs on school grounds, what happens when, over the weekend, a student makes a derogatory remark directed towards another student via Facebook?  Is the school powerless to discipline for hurtful and disruptive remarks even if those remarks occur just a few feet off school property? The student’s answer to that concern is that there is no free speech right to bully and that to encourage good values the schools can create a policy that makes bullying or harassment an offense.  The rhetorical counter of course is, cannot the school inculcate values of cohesion and trust within the context of a team sport and classify derogatory remarks about the team as an offense, as the Mahanoy school district did in this case?

Further, the school argues, this is not a political statement, but a profanity laced teenage tantrum, critical of a cheerleading coach’s decision.  B.L. not only voluntarily joined the team, but her comments were directed to and predictably reached the cheerleading team and disrupted the classroom environment.  Nevertheless, what if a student decided to protest a school bond referendum stating that the voters should not approve the bond because the school is awful? Counsel for the school says, the speech needs to be directed to a school audience, not the public, and if it is directed to a school audience then it also needs to substantially disrupt the school day.  If it meets those criteria, then the student can be disciplined.

Which rationale and justification will win the day and how the Court will ultimately decide remains to be seen.  What we can be sure of, to paraphrase the attorney for the school district, whatever the decision, someone will surely freak out. A decision is expected no later than June 30, 2021.

In anticipation of this decision schools should be prepared to review their student code-of-conduct as well as other related policies.  Well-crafted policies can help school districts and administrators avoid potential liability while fostering a positive learning environment.

If you have any questions or would like to discuss further, contact Sean Clough  or any of our Education & Municipal Law team here.