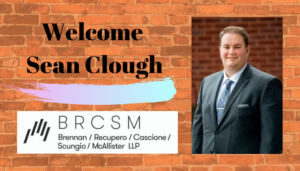 Welcome Sean Clough who recently joined BRCSM as part of the attorney team in the Providence office.

His previous experience includes an externship with Rhode Island Supreme Court Justice Francis Flaherty, where he researched and analyzed legal issues such as collateral estoppel, Fourth Amendment rights, and the limits of agent authority.

Reach out to Sean at sclough@BRCSM.com